China is the first major nation to flag support for the Taliban, stating it was ready for 'friendly relations' The Taliban on Tuesday declared a general amnesty for all government officials and urged them to return to work, two days after taking power following a lightning sweep through the country.

"A general amnesty has been declared for all... so you should start your routine life with full confidence," said a statement from the Taliban.

President Joe Biden earlier defended the withdrawal of US troops from Afghanistan after the Taliban's stunning military takeover that triggered panic in Kabul with thousands mobbing the airport in a desperate attempt to flee.

In his first public appearance since the group seized control of the country at the weekend, he admitted the Taliban advance had unfolded more quickly than expected.

Heaping criticism at the Western-backed government that was ousted with shockingly little resistance, he said US troops could not defend a nation whose leaders "gave up and fled", as did President Ashraf Ghani.

"We gave them every chance to determine their own future. We could not provide them with the will to fight for that future," Biden said in his address at the White House. 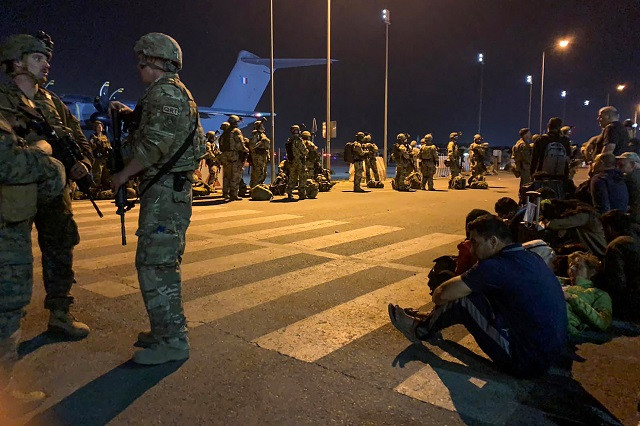 French soldiers stand guard as French nationals and their Afghan colleagues wait to board a military transport plane at the airport in Kabul. PHOTO: AFP

"American troops cannot and should not be fighting in a war and dying in a war that Afghan forces are not willing to fight for themselves."

The Taliban captured Kabul, and most other main cities, with little bloodshed.

But in the capital, panic gripped many residents who feared a repeat of the Taliban's rule from 1996 to 2001.

At the airport, thousands of Afghans scrambled to board the few flights available.

"We are afraid to live in this city," a 25-year-old ex-soldier told AFP as he stood among huge crowds on the tarmac. "Since I served in the army, the Taliban would definitely target me."

The United States has sent 6,000 troops to ensure the safe evacuation of embassy staff, as well as Afghans who worked as interpreters or in other support roles.

On Monday, dramatic footage posted on social media showed hundreds of men running alongside a US Air Force plane as it rolled down the runway, with some clinging to the side of it.

In other videos, civilians frantically clambered up an already overcrowded and buckling jetway.

One picture carried by US media showed a jam-packed US military transport plane purportedly with about 640 Afghans on board -- some of whom climbed onto the half-open ramp at the last minute and were allowed aboard.

Taliban fighters have taken over checkpoints across Kabul, and militants with rifles slung over their shoulders walked through the streets of the Green Zone, the heavily fortified district that houses most embassies and international organisations.

Ghani's departure on Sunday finalised the collapse of his government. His whereabouts are currently unknown.

The Taliban sought to reassure the international community that Afghans should not fear them, with co-founder Abdul Ghani Baradar saying the militants needed to show that they could "serve our nation and ensure security".

The State Department said any US ties with a Taliban government would depend on their respect of human rights and rejection of extremism. 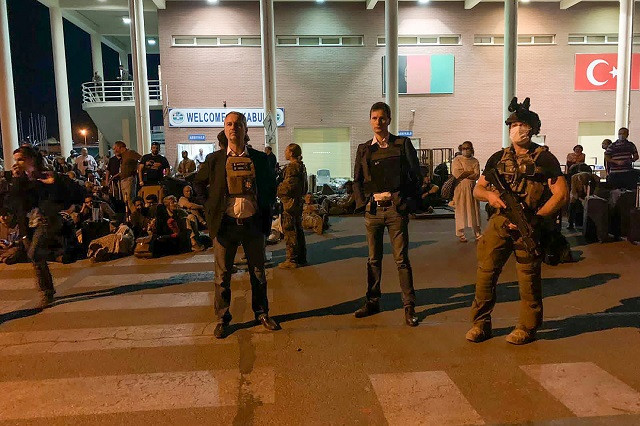 French ambassador to Afghanistan David Martinon (L) waits with French and Afghan nationals to board a French military transport plane at the airport in Kabul. PHOTO: AFP

Biden issued a stern warning to the Taliban, saying any threats to US interests would be met with a "devastating" military response.

China, meanwhile, was the first major nation to flag support for the Taliban, stating it was ready for "friendly relations".

Both Russia and Iran also made diplomatic overtures.

Critics say the US reputation as a global power has been badly tarnished by the Taliban's victory, nearly 20 years after they were ousted from power by a US-led invasion over their support for Al-Qaeda.

But Washington has insisted that its two decades of war in Afghanistan was a success, defined by quashing the Al-Qaeda threat.

The UN Security Council said Monday the international community must ensure Afghanistan does not become a breeding ground for terrorism.

"The world is watching," UN Secretary-General Antonio Guterres said. "We cannot and must not abandon the people of Afghanistan."